What's a vegetarian substitute for Parmesan?

My recipe for Macaroni Cheese (or Mac and Cheese) requires some parmesan, but parmesan isn't vegetarian as it uses Rennet.

Are there any Vegetarian or Vegan "free from" parmesan substitutes in the UK that I can buy in a supermarket?

I don't really mind if it contains milk by the way.

You don't have to go to specialist stores; you can get vegetarian Parmesan in at least three of the major UK supermarkets!

It seems to usually be under each supermarket's "budget" branding. I believe the reason for this is that "Parmesan" is a "DOP" name which means that it has a designated origin and legally has to be made in a particular region and with a particular recipe, which includes animal rennet. Since they're not calling it "Parmesan" but rather "hard cheese", they can do away with the animal rennet and also make it domestically which is cheaper, hence the budget branding: 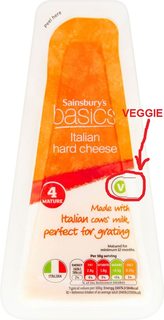 Source: this site or many other places online. 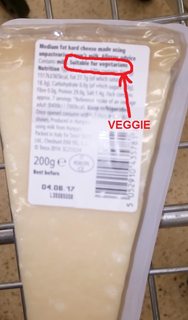 Morrisons also have vegetarian hard cheese under their "M Savers" brand, which is clearly marked with their green leaf vegetarian motif. This is available in both grated form and in a solid wedge. 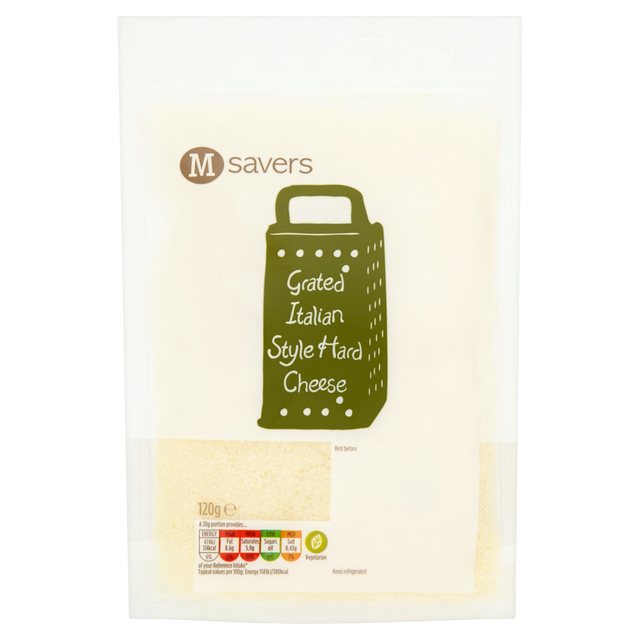 Since those three large supermarkets offer vegetarian hard cheese, it's reasonably likely that others e.g. ASDA may offer a version.

Below is a list of places where vegetarian Parmesan-like hard Italian-style cheeses can be found:

These are all pretty similar to real parmesan (and they're real cheese, not a substitute), they just use vegetable rennet instead of animal/microbial. They all contain milk.

Here's a widely available vegan option: Violife Prosociano. It's sold in health-food shops and Tesco, and online for example at The Vegan Kind 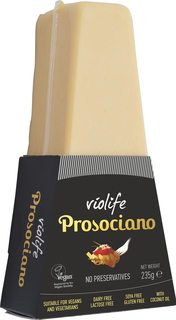 For those who prefer not to use processed foods, I find a combination of hemp seeds, nutritional yeast, garlic powder and salt does stand in for Parmesan quite convincingly.

Yes there are vegetarian versions available, but what you have to bear in mind is that there is a European scheme which protects the origin and quality of traditionally made foodstuffs such that it is illegal to make cheese and label it as "Parmesan" unless it is made in a specific region and with a specific method/recipe. In Europe, anything called "Parmesan" or "Parmiggiano" will always be non-vegetarian. Any vegetarian parmesan substitute is likely to either just be called "hard cheese" or have its own brand name. Outside of Europe however this is not always true since (as far as I know) the scheme is only agreed within Europe.

The European specification for Parmiggiano Reggiano cheese can be found here and contains the following:

Milk coagulation, obtained exclusively by the use of calf rennet, takes place in bell-shaped copper vats; up to two wheels are made for each vat.

Other cheeses which must always be made with animal rennet (in Europe) are Grana Padano and Pecorino Romano (which are both Italian hard cheeses) and Gorgonzola.

There is a page with good information about vegetarian cheese here: https://www.vegsoc.org/cheese

In supermarkets etc. in the UK they often seem to have an "own brand" of "value hard cheese" or "basics hard cheese" etc. which is cheaper than true Parmesan (since it can be made anywhere and does not have to adhere to the same strict method), but is very much like Parmesan in flavour and texture and in my experience has always been suitable for vegetarians.

There are also other Italian hard cheeses which are very similar to Parmesan but which are suitable for vegetarians such as "Granarolo Quattrocento Italian Cheese": Waitrose (UK supermarket) - though note that this example is also lactose free. These other Italian hard cheeses may be of a higher quality and closer to real Parmesan than the previously mentioned "basic"/"value" supermarket hard cheese but this is speculation on my part as I have not tried them.

(No one will mistake this for parmesan cheese, but it's great on pasta/pizza where you would normally use a grated parmesan.)

In a food processor mix bread crumbs and walnuts with some fresh garlic, olive oil, and nutritional yeast. Salt to taste. Keeps in fridge for quite a while.

This gives a nice savory crumb/powder that you can use in places where ground parmesan would normally be used.

Tesco and Sainsbury have a line of vegan cheeses. As mentioned above, Violife does ones. If you cannot find an alternative, you can leave it out as it is more of a topping instead of a main ingredient. Or here is a link to a vegan parmesan cheese.

Not the answer you're looking for? Browse other questions tagged cooking substitutes lacto-ovo-vegetarianism uk or ask your own question.

24
For a recipe that contains fish, what could be a vegetarian substitute that somewhat retains taste?
13
Vegan substitute for down sleeping bags?
13
What can substitute for cow's milk in a vegan breakfast?
9
What can I swap for cream that's still "creamy"?
6
Vegetarian diet during pregnancy
3
What's the difference between lactose-free and dairy-free?
6
Does a live animal tracking system for vegetarian products exist?
4
What vegan food could substitute for chunks of beef in stew?
4
What's a good way to prepare vegan corn on the cob?