I just saw a great question here regarding protein sources in vegan food; the answers summarize the nutritional specifics very well. I want to go in a different direction, so I'm going to reframe this a bit to deal with culinary aspects instead of nutritional qualities.

Most vegetarian/vegan food, from a culinary point of view, is still meat-centric. Veg dishes mostly either:

I'm from Argentina, and anyone that's been can attest that most people there don't even know what the word "vegetarian" means. I still to this day cannot think of a single local dish that does not fall through the requirements above. Funnily enough, I get a similar feeling when I visit vegetarian or vegan restaurants in the US, with all their faux meat.

Dishes like Lo mein and pho could go equally well with or without meat, or replacing it with tofu. Rice and beans, grilled vegetables, and salads, on the other hand, all take a side role when a big protein comes into play.

Similarly, one of my favorite main dishes, a corn stew called Locro, changes its fundamental character when you make it vegetarian; it becomes Humita, more suited as a filling for pies and empanadas.

There are many amazing vegetarian dishes from cuisines around the world, but how many are really meant as main dishes that highlight vegetables? Is there anyone working on this point of view? I'm thinking along the lines of saag paneer, ratatouille, risotto, tempeh. Does anyone here know of any resources or cookbooks that focus on this issue?

The culinary pattern of "having some dense protein along with lighter ingredients" works, both from a flavor/texture and nutrition standpoint, whether it is implemented using meat (as found in both western and asian cuisine) or anything else (as is found mostly in asian/mediterranean/... cuisine, where you will find eg original tofu and tempeh dishes). Arguably, if you see plant and animal based dense protein as equal, adapting eg a beef dish to seitan, or a chicken dish to tofu, is just as "legit" as adapting a beef dish to goat meat.

The dishes that are truly meat/fish centric are those that either rely on natural shape of animal parts (eg a whole fish served in a pool of sauce or meat on the bone), those dependent on the exact texture or taste of a certain fish (hard to "fake"), or those deriving significant parts of their aroma profile (taste, as in basic six tastes, is comparatively easy to adapt!) from animal ingredients. The aroma issue makes eg some japanese or cantonese dishes that seem veg centric harder to adapt than eg szichuan meat dishes that actually derive a lot of their flavour profile from plant based ingredients, though the latter can pose more of a challenge due to the "natural shape" issue.

And since this question has a subtle opinion-flavor anyway: You don't owe anyone or anything not to satisfy your omnivore instincts if you want to - you (at most) owe animals not to involve them in that satisfaction process!

There are innumerable vegetarian cook books.

I think your question is a matter of perception/opinion though -- I'm thinking of a "spinach, corn, and nut raised pie", as an example of big, central (festive) dish; but you might view that as a meat pie with a nut-based substitute.

I became vegetarian as an untaught young adult, so I went though a phase of thinking as you do: i.e. that "a vegetarian diet is a diet without meat", which (attitude) emphasizes the lack of meat and the substitution of meat. Later (e.g. now) I never think of meat except for other people. On the subject of protein, I view any dish with legumes (beans or peas or lentils) as "the central dish" -- i.e. they are "the protein" and never "take a side role when a big protein comes into play".

You might get some satisfaction from regional cuisines of countries with a Buddhist culture (some schools of Buddhism prefer vegetarianism), i.e. East Asia (China, even Thailand, etc.). I think it's a American-Chinese dish (maybe I met it in Singapore too) that's made with tofu and named "Buddha's delight".

Or "falafel" is an example from the middle-east (which I like as a fast food, but too difficult to home-make because they're deep-fried).

Another possibility is South Indian cuisine. I think (perhaps wrongly, I'm no expert) that North Indian cuisine is Muslim-influenced and often includes meat, whereas South India is sort of natively vegetarian (though also including dairy products like yogurt, so not vegan).

Maybe it's like learning a new language. For example, initially I understand French by translating from English (like, you understand vegetarian cuisine from a carnivorous or omnivorous perspective). Later I understand French fluently without translation (without reference to English), like a native. You wrote, "Rice and beans, grilled vegetables, and salads, on the other hand, all take a side role when a big protein comes into play." If I go somewhere and they give me grilled vegetables and salads then I'm grateful that they're trying to "speak vegetarian". If there's a dish with legumes in then I take that as their being fluently vegetarian. 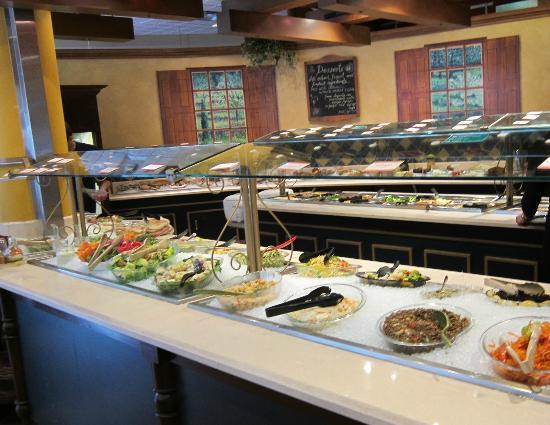 "This photo of Le Commensal is courtesy of TripAdvisor"

... above is an example of a restaurant (now closed) which I considered as "natively" vegetarian. It did have meat substitutes (some people/customers like those), it also had for example what's probably a lentil dish in the foreground, next to the carrots (and a chickpea dish two to the left of that, and so on).

Don't be too hard on restaurants. I admit that "eating out" is one of the difficulties of being vegetarian or vegan, depending on the country.

In the UK for example, my memory of it is that it used to be (in the 1970s) that the selection of vegetarian fast food was either "fish-and-chips without the fish", or "rice-and-curry without the curry"! Now there's much more choice. I think, I guess, that about 10% of the population (in the UK) is vegetarian, which is too big for restaurants to ignore.

Consider this scenario: a party of several (family or friends) want to go out to dinner. Only one of them is vegetarian. They stop and look at a menu and, if there isn't even a single vegetarian dish, then the whole party goes somewhere else. I guess it's for this reason that almost every restaurant in the UK now seems to offer at least one vegetarian selection.

Now consider the opposite scenario: a party of vegetarians with one carnivore (a guest) want to go out. If the (vegetarian) restaurant doesn't offer even one thing for the carnivore then the whole party must go elsewhere. I imagine (pure speculation on my part) that this is a reason why even an all-vegetarian restaurant offers a simulated meat dish (a "Boeuf Bourguignon" with fake beef, for example).

Not the answer you're looking for? Browse other questions tagged cooking protein or ask your own question.

27
What are the highest protein sources for vegetarians/vegans?
17
Is meat protein really "better" than protein from a vegan or vegetarian source?
7
How much protein does Aquafaba contain?
8
Cheapest vegan protein options
11
Is it safe to make mylk/milk from rice?
12
What are the disadvantages of consuming more protein than necessary?
5
Body got skinny and gaunt; caused by not eating meat any more?
7
How frequent and regular should protein intake be?
6
Where can I find a cheap vegan protein bar?