What can substitute for cow's milk in a vegan breakfast?

Every morning, I generally eat cereal with milk

As I'm going vegan, I replaced the milk with organic soy drink with vanilla (that I greatly prefer to milk).

But I wonder if it is a good substitute to the milk, nutritionally speaking. Does it bring the nutrients that I needed from milk? Are they present in sufficient quantity?

I read that almond milk could also be used. Nutritionally speaking, is it better than a soya-based drink?

veganism substitutes dairy-substitutes
Share
Improve this question
edited May 16, 2018 at 16:51

This comparison of an 8oz (230 mL) serving of 1% fat cow's milk and an unsweetened soya milk may be instructive. Most people would probably agree that the nutritional profile of soya milk looks better. It provides unsaturated rather than saturated fats, and less sugar. 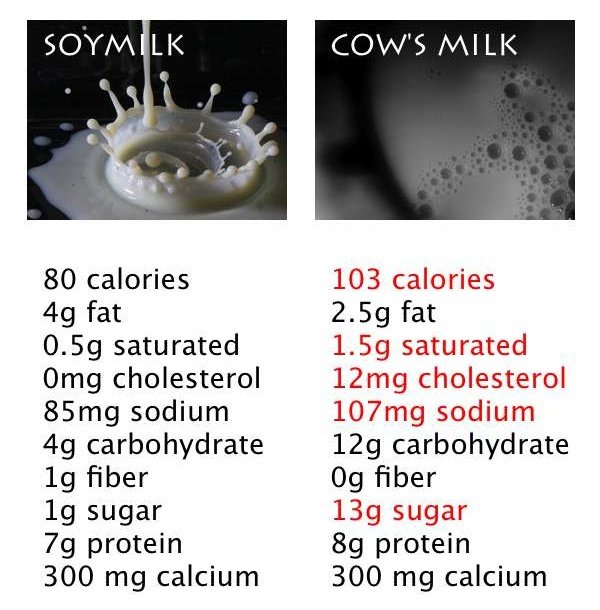 If you are using a sweetened soya drink, it will have a higher proportion of sugars. Different soya and other vegan milk "substitutes" have different vitamins and minerals added to them as well as different sweentening ingredients, so YMMVAPD. You should check the label (a skill all vegans develop sooner or later) for specific details. But in general, soya is high in protein and provides some calcium (and many soya drinks are fortified with calcium)

Milks made from nuts and other sources are lower in protein and generally lower in calcium (unless fortified with calcium), so if that is your concern, then soya may be the best choice for you. However, almonds provide vitamin E, fibre, and other nutrients, including calcium and iron. I personally vary my milk choices rather than sticking to a specific type, trusting that a varied diet overall will provide all the nutrients I need.

To answer your question I took nutritional values of some of the popular vegan alternatives. I compared:

As you can see, it has really similar nutritional values for fat and proteins. The carbohydrates are about half of the cow's milk even though it is sweetened. You can add some sugar to it if you want. It contains marginal amounts of salt, but rather close to the cow's milk. Due to the fortification, it contains the same amounts of vitamins and minerals as regular milk. It also has some fibre, which, although not what you drink milk for, is not bad to have in your diet.

All of the other milks I compared were not as close to cow's milk, mainly regarding the fat and protein content.

Values are per 100ml until stated otherwise.

Since you are looking for good milk substitute I would suggest you to look at three things when choosing your vegan milk.

EDIT: Based on your comment, I edited my answer to include information you asked about.

Not the answer you're looking for? Browse other questions tagged veganism substitutes dairy-substitutes or ask your own question.

15
How can I make a pleasant vegan latte? Soy milk often curdles in heat
13
Vegan substitute for down sleeping bags?
10
Vegans: Besides supplements, what can substitute for Calcium?
15
How does the cost of production of soya milk compare to cow's milk?
6
Can prebiotics substitute for consumption of probiotics in vegan diet?
9
What can I swap for cream that's still "creamy"?
5
What can replace milk, for vegan pancakes without eggs?
6
Milk substitute for home-made glue
7
Hand sieve vs nut milk bag for straining plant milk