Do all cruciferous vegetables have the same nutritional profile?

I recently learned that broccoli, cabbage, cauliflower, kale, and collard greens are all different cultivars of the same original plant species, Brassica oleracea (B. oleracea for short).

These are some of my favourite vegetables, and I often combine them together in my favourite dishes. I thought that this counted as eating a variety of foods, but is that not really true because they were all the same plant originally? Is there any nutritional benefit to eating these foods in combination or is it mainly for culinary purposes?

A quick search on Google yielded articles that stressed the importance of including some cruciferous vegetables, but I didn't see much written about comparison between them. I guess there are some important nutrients that they all provide, but that doesn't necessarily answer whether there are differences between them. 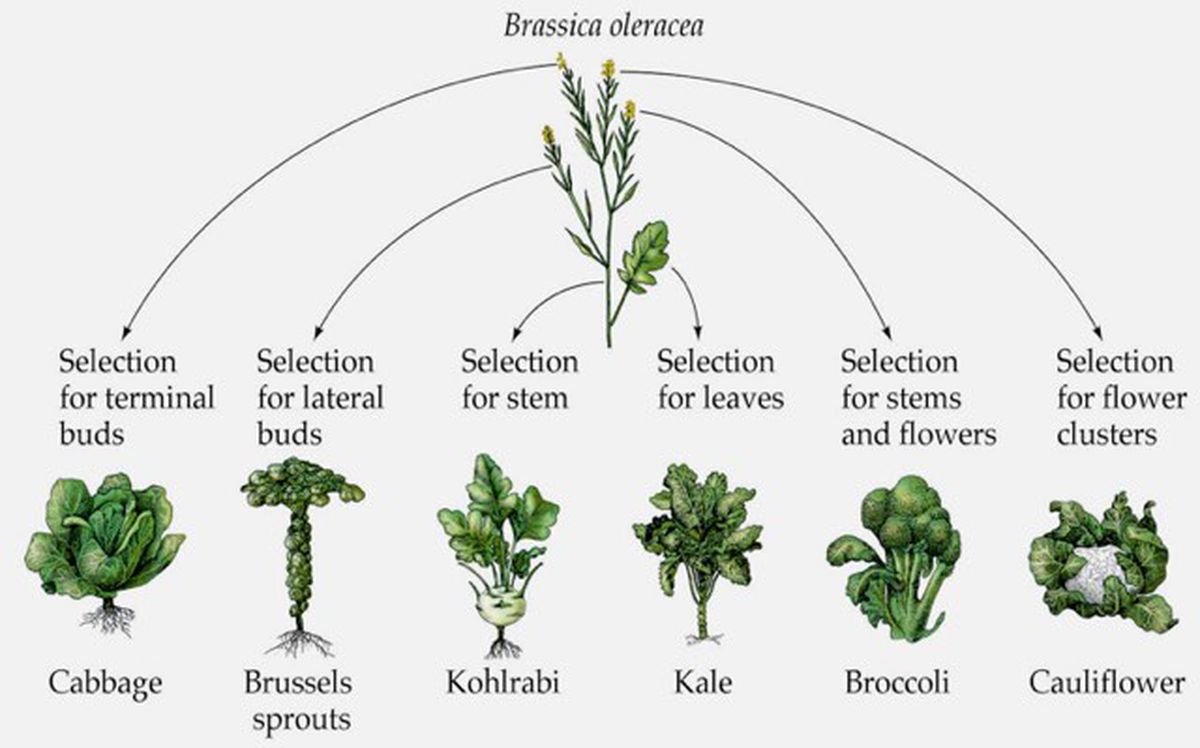 Image borrowed from Vox - Kale, Brussels sprouts, cauliflower, and cabbage are all varieties of a single magical plant species

nutrition vegetables
Share
Improve this question
asked May 15 '18 at 16:41

There's actually significant variation between the cultivars. Here's a comparison of macronutrients in each food based on a 100 gram sample.

Similar variation is observed in macronutrient ratios. Protein content is lowest in cabbage (12.6%) and highest in kale and broccoli (21%). Fat content as a percentage of total food energy varied widely from cabbage (3.3%) to kale (15.8%).

Total and net carbohydrate contents are similar between all 6 vegetables. Brussels sprouts provided the most fibre (3.8 grams) while cauliflower provided the least (2.0 grams).

A large difference in omega-3 fatty acids was observed, with kale providing the most (180 mg) while broccoli and cauliflower provided the least (20 mg).

Because macronutrient contents varied considerably, I'll try to compare vitamins more fairly by considering a 100 kcal portion of each food.

Some B vitamins were present in similar contents, but kohlrabi was especially low in B2 (riboflavin) and a wide range was observed for B5 (pantothenic acid) with cauliflower providing the most (2.7 mg) and kale the least (0.2 mg).

Vitamin A content (in the form of carotenoids, especially beta carotene) was extremely variable, with kale providing the most (20,000 IU) and kohlrabi the least (130 IU).

Vitamin E content was extremely variable with broccoli providing the most (4.2 mg) and cauliflower the least (0.3 mg).

Vitamin K content was extremely variable with kale providing the most (1438 µg) and kohlrabi the least (0.4 µg).

No single variety was best at providing all vitamins.

A few minerals (iron, magnesium, manganese, phosphorus, potassium, sodium) had low variation between plants, with only about a 2:1 difference from most to least. However, some minerals did vary considerably more.

Kohlrabi and especially kale have high copper content (0.5 and 3.1 mg, respectively) while all the rest have 0.2 mg or less.

Selenium content was low in cabbage and kale but high in broccoli and brussels sprouts.

Zinc content was mostly consistent around 0.7-1.2 mg, except for kohlrabi which was especially low at 0.1 mg.

Not the answer you're looking for? Browse other questions tagged nutrition vegetables or ask your own question.

8
Are vegetarian and vegan macronutrient needs the same as in traditional diets?
13
What are the nutritional properties of soy “whey”?
6
How to avoid worm infestation from consuming raw vegetables?
0
Are there any vegetables that can reduce body fat?
1
What 1 plant has the widest nutritional value over all other plants in the world?
2
What are the health benefits of buying organic for fruits and vegetables on the EWG's Clean 15 List?
3
Why ought someone buy conventional, not organic, for fruits and vegetables on the EWG's 2018 Dirty Dozen List?
4
Are there any hazards involved in eating old vegetables?