What are the highest protein sources for vegetarians/vegans?

One of the most frequent questions I am asked as a 30+ year vegetarian is, where do you get your protein? There seems to be a belief that the only source of protein is meat.

What are the highest sources of protein for vegetarians and for vegans?

As long as you aren't eating the same food every meal, you will get enough protein on a vegan diet. Vegetables, potatoes, rice, grains, beans, nuts, seeds, and soy etc. all contain plenty of protein. Some are defficient in one or two amino acids that the others contain, so as long as you eat different things throughout the week you will get enough protein to meet your daily requirements in every amino acid. Note you do not have to mix foods at meals, just have to mix them up throughout the week. 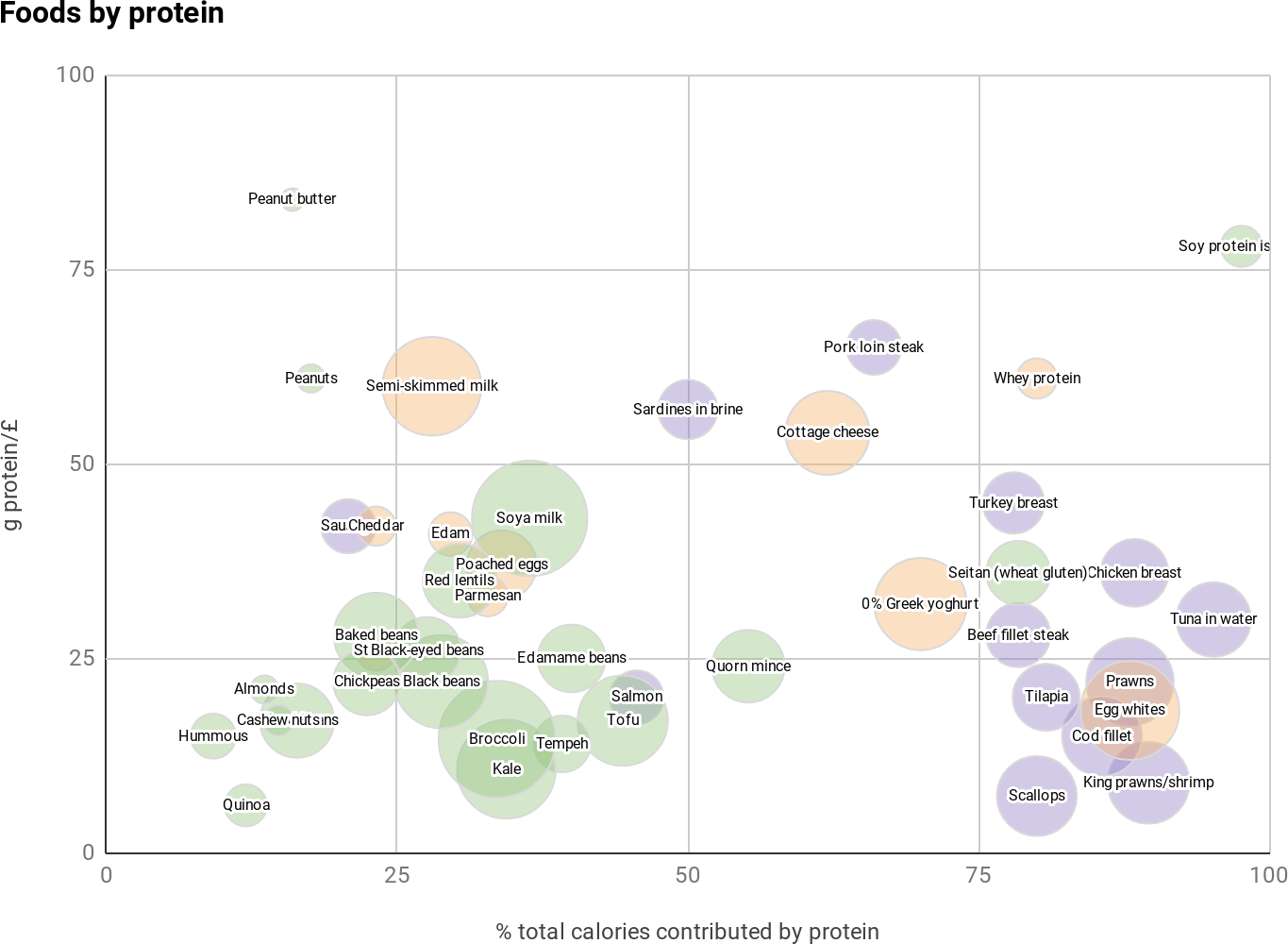 The data and chart come from this Google spread sheet. Dot size represents the 100 kcal serving size, that is how many grams of the product provide you with 100 kcal.

This will not be a comprehensive answer and is intended to kick-start what might end up as part of a FAQ.

Most pulses (the seeds from legumes) e.g. lentils, are a good protein source and are also versatile meal ingredients.

Nuts have high levels of proteins.

Soy is a seed that can be made into tofu or a cow milk substitute.

Have a look at this site (no affiliation) for a good list with explanations and recipes. http://greatist.com/health/complete-vegetarian-proteins

I have been a vegetarian all my life. Recently I started to do some dieting to lose weight, and I have cut down on carbs a whole lot. So, I'm always looking for protein sources to incorporate in my diet. And this is what I eat.

I hope you find these helpful.

Personally I tend to eat Quorn products, which are made from mycoprotein, which is a kind of fungal protein. It's fermented in vats and fed with glucose syrup, so it's entirely fungus and plant based. Interestingly it also doubles its mass in 5 hours, so it's a fairly efficient substance too.

Note that some mycoprotein products might not be suitable for vegans because they may contain free-range eggs, but in recent years more vegan variations have been introduced.

As for the protein content, it has more protein per mass than beef, and it has a reasonably high fibre content.

Unfortunately I don't have the numbers yet (I'll edit then), but for proteins I have also included in my diet:

About sprouted seeds: if I remember well that changes the proteins content (I'm gonna search for numbers about that, but I sort of remember FAO advising to consume chickpeas half sprouted to gain the nutriment composition advantage of both dried and sprouted peas)

e.g. sprouted brown lenses do contain vitamin B12, whereas dried they do not contain B12.

About Algae I eat routinely:

I don't remember which ones exactly in which quantity, I have to make my answer more precise: IIRC most of them have high proteins content.

My first reading for scientific sources suggests: there are no or really few scientific studies about algae after being dried. We don't know if the process of drying keep all the extremely rich nutriments that algae do contain when alive.

And just for the mind shift, it is not disgusting at all, I can assure you, it was extremely easy to start mixing them with my dishes.

I consume them either cooked in the same water as noodles, rice, quinoa, peas, beans or (depending on the algae type), raw as mixed ingredient in salads: the barrier was only mental, really.

I have never tried to eat them seperately though. I think Kombu would make a good first try. Its flesh really resemble vegetables like leek.

As someone who improved his benchpress from 50kg/110lbs to 110kg/242lbs almost solely on vegan protein, here is what I've found most practicable and healthy:

Seitan or gluten can be used to make some tasty dishes but shouldn't be considered as a protein source. Even natural wheat has a very low content of Lysin. But when gluten gets washed out from wheat grains it loses even more of it and contains 5 time less of it then soy protein isolate (not to mention you feel like sh*t if you consume daily higher amounts of gluten)

Not the answer you're looking for? Browse other questions tagged protein lacto-ovo-vegetarianism or ask your own question.

17
Is meat protein really "better" than protein from a vegan or vegetarian source?
14
Why is green gram, also known as mung bean, not a popular protein source?
13
How can I determine how much protein I need in a vegan diet?
0
Protein-rich vegetarian recipes without nuts

17
Is meat protein really "better" than protein from a vegan or vegetarian source?
14
Why is green gram, also known as mung bean, not a popular protein source?
10
Are there any farms that sell "cruelty-free" eggs (i.e. that don't slaughter older hens)?
8
Are there risks from eating too much nutritional yeast?
4
What meat substitutes can be used in donairs?
12
What are the disadvantages of consuming more protein than necessary?
5
Body got skinny and gaunt; caused by not eating meat any more?
7
How frequent and regular should protein intake be?
3
Is it bad for your health to consume less than the recommended 0.8 g of protein per kg of body weight per day?