Are there any non-animal whole foods that provide vitamin D₃? I know that vitamin D₃ can be obtained through supplements and vitamin D₂ is found in some mushrooms. Is sunlight the only other way for vegans to get vitamin D₃?

From what I can gather, there does not seem to be vegan food sources that provide vitamin D3. From This source, they first provide a table with the recommended daily intake of vitamin D: 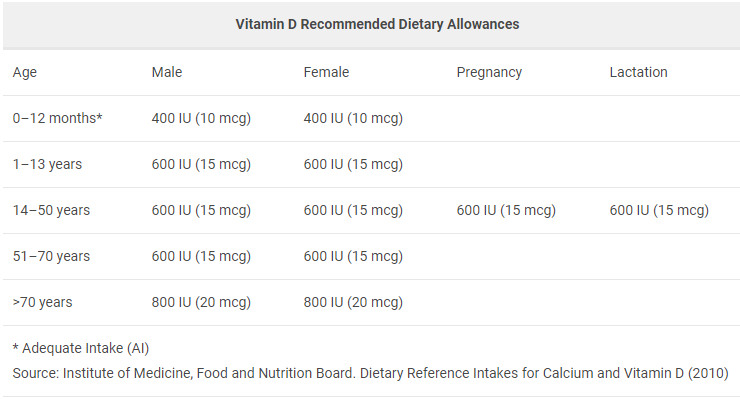 Since the US government still doesn’t count the value of D2 and D3 as being different, they only report an RDA for the umbrella category of vitamin D.

This source then lists the

and how much vitamin D they contain as:

From this list, only two items (excluding the supplements) specifically mention containing D3 - Alfalfa and Lichens. However, the article goes on to say how these sources aren't safe for human consumption. Therefore, I would conclude that the best (and safest) way to get a source of vitamin D3 is via supplements.

Not the answer you're looking for? Browse other questions tagged veganism nutrition vitamins-and-minerals vitamin-d or ask your own question.

29
Where does the B12 in vitamin supplements come from?
11
Are (plant-based) vitamin D₂ supplements as effective as vitamin D₃?
6
Could a vegetarian diet indirectly cause vitamin C deficiency?
5
How can vegans obtain sufficient zinc from whole foods?
2
Are insects a better source of any nutrients than plant-based foods?
8
Any website to search for foods high in a particular nutrient?
6
Is there a way of telling if foods are vegan by a single nutrient or a certain combination of nutrients?
4
Are fat soluble vitamins, A, D, E and K, an issue on vegan blood test results?
6
Is the growth medium used to cultivate vitamin B12-producing bacteria vegan?
4
How can I modify a fruitarian + dairy diet to provide sufficient vitamins, minerals and protein?