After how long will one see symptoms of lack of B12?

Suppose a person goes vegan and neither eats food items with B12 nor supplements, i.e., doesn't take vitamin B12 at all.

This depends on the B12 status the person had initially, and probably on other unknown individual factors. While there are no proven natural wholefood sources of B12 that are vegan, it's possible that some people obtain small quantities of B12 from unrecognised or incidental sources (since B12 is produced by soil bacteria) while others do not, so it's probably impossible to predict for a given individual how long it will take for them to develop a deficiency. B12 is stored in the liver and apparently husbanded very carefully by the body. Obviously, it would be unethical to study this by deliberately depriving people of B12 sources.

The Vegan Society's B12 guidance says

I'll include a couple of personal anecdotes. When I became vegan, I had been an ovo-lacto vegetarian for around 15 years already, and had gradually cut most dairy products from my diet. I started to experience disordered sleep patterns that I realised might possibly be related to B12 only a few months after going vegan, although I was regularly eating Marmite (worth noting here that the serving size of yeast extract typically eaten is not sufficient, and some yeast extract spreads are not fortified with B12 at all). I started taking strong B12 supplements, and the symptoms went away (of course, they might have been caused by something else). My mum, who went (lacto-ovo) vegetarian two and a half years ago, recently mentioned to me, after a few months of me cooking vegan food for her nearly every day, that her hands and feet were "itchy". I immediately felt guilty because I knew this was a B12 deficiency symptom and I hadn't made her aware that people following a plant-based diet need more than the occasional slice of marmite-y toast to maintain healthy B12 status. She started taking B12 supplements, and the symptoms went away.

It seems to me, that if your B12 status is poor (you have had a low-level deficiency for a long time), deficiency symptoms may appear quickly when your intake reduces.

Also, please be aware that B12 deficiency is serious even before symptoms occur and that symptoms are subtle and may easily be mistaken for something else, or for general malaise. By the time your hands and feet start tingling (if that happens), while you are still feeling well, irreversible nerve damage has already occurred. If you become pregnant, and your B12 status is poor but asymptomatic, you may have pregnancy complications. Poor B12 status (with no obvious symptoms) increases the risk of heart disease.

I recall the period is roughly 1-3 years. So I searched B12 depletion years and got this:

N Estimation of the Period Covered by Vitamin B12 Stores

With maximum stores, but for people with pernicious anemia, the threshold1 of adequate B12 is reached in 1.5 years (549 days). 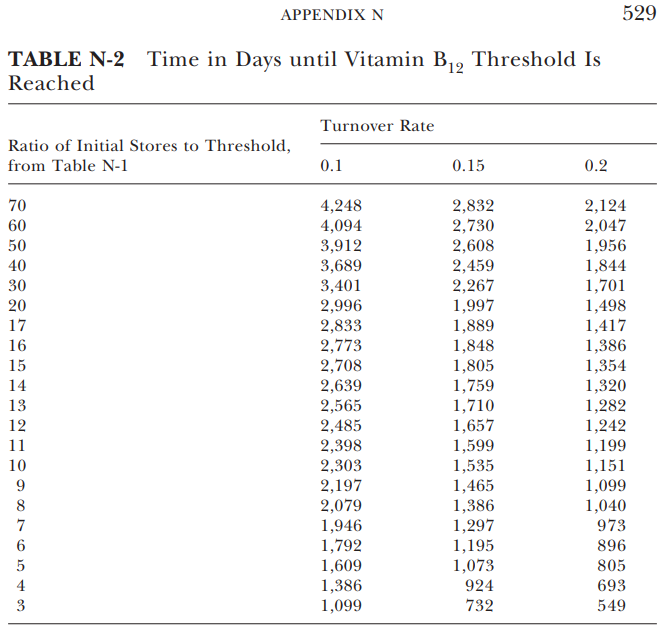 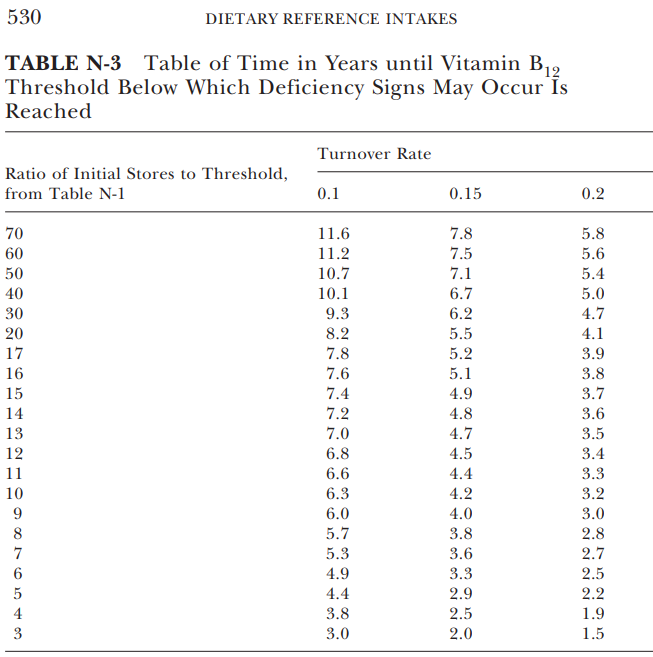 As indicated in Chapter 9, it is possible to estimate the length of time body stores of vitamin B12 held in reserve will maintain adequate nutriture when dietary intake is nonexistent as a result of adopting a vegan or similar diet very low in B12 or when decreased absorption of vitamin B12 occurs as a result of atrophic gastritis or pernicious anemia.

This estimate is based on being able to ascertain what the expected turnover rate will be (0.1, 0.15, and 0.2 percent have been found experimentally to occur). It has been estimated that in individuals with normal absorption and reabsorption rates for vitamin B12, the daily turnover is 0.1 percent per day. For individuals with pernicious anemia, who cannot absorb or reabsorb vitamin B12, the turnover rate is about 0.2 percent of the body pool or stores per day. As individuals develop various degrees of atrophic gastritis, it is possible that a turnover rate of 0.15 percent is appropriate.

Not the answer you're looking for? Browse other questions tagged or ask your own question.

3
B12 deficiency in vegans

15
Portable/compact endurance food?
8
How should one adapt a vegetarian diet after breaking a bone?
12
How common is it for the livestock industry to supplement B12?
5
How long does it take for cholesterol to lower down after switching to veganism?
5
COVID-19 vaccine considerations for vegans